Fuel cell fusion: General Motors and Honda set up a joint venture to serially produce fuel cell stacks. Fuel Cell System Manufacturing has been in the making over the last three years. By 2020, FCV of both manufacturers will drive with fuel cells build at GM’s Brownstown facility in Michigan. A first stack is based on Honda’s Clarity technology. Cost are calculated at 85m dollars.
greencarcongress.com, electriccarsreport.com 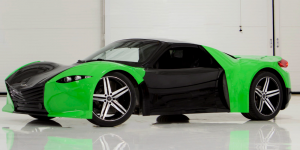 Tesla cousin: Dubuc Motors presents the Tomahawk, a sleek electric sportscar said to go 370 miles far. The 60 mph barrier is reached in 3 seconds and the US-Canadian start-up takes pre-orders at 5,000 dollars each. Once it goes into production later this year, another 120,000 dollars are due.
inhabitat.com, dubucmotors.com, youtube.com

Electric motorcycle: Essence Motocycles is working on the E-Raw v2 prototype. The electric motorcycle will be shown in Lyon, the French start-up’s base. The motor delivers 80 kW, while the 10 kWh battery lasts for almost 200 km. Only a production date is missing so far.
technologicvehicles.com

Compared: Plug-in hybrids for less than 40,000 GBP are numerous and Autocar tested them all. The BMW 330e faced the Audi A3 Sportback e-tron, VW Passat GTE Estate, and Volvo V60 D5 Twin Engine. Turns out the BMW is the cheapest and best among the PHEV pack.
autocar.co.uk

Free Tesla: The Model X can enter Australia officially now as Tesla received certification. Up to 70 EV were stuck at the docks of Sidney and Melbourne awaiting government approval.
eftm.com.au