Electric drive for UV: UQM Technologies and Meritor agreed to develop full e-axle systems for medium and heavy-duty commercial vehicles. Mechanical drive train components from Meritor will be coupled with UQM’s technology and hardware so first prototypes can be expected later this year.
greencarcongress.com, businesswire.com 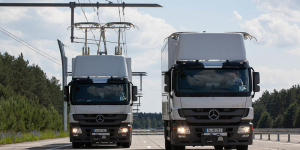 German eHighways set: The Autobahn A1 and A5 have been selected to host electric trucks powered through overhead wires as reported. They lead from Lübeck harbour and Frankfurt airport further inland. Testing will commence by 2019.
sueddeutsche.de (in German)

Retro-retrofit: French start-up Ian Motion electrifies oldtimers. Its first deed is a 1989 Mini, also known as the Austin, whose new EV system has a range of 150 kilometres. More retrofit electric goodness shall become available towards the end of this year.
technologicvehicles.com, automobile-propre.com (in French)