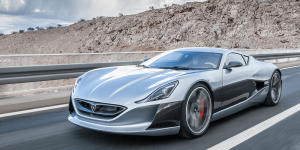 Most exclusive Rimac: The Croatian company that rides on hype wants to top its own Concept One with an even racier version. The Concept S however, will be made only twice and cost 1.6m dollars each. The first Concept One, of a limited edition of 8, will be delivered in March.
carbuzz.com

Crazy but legally so: The Craz-E-Horse is an electrified 2007 Ford Mustang GT built to break the world’s speed record for EVs. The project from New Zealand says its racy mule will do the 1/4 mile in an estimated 7.54 sec at 326 kph in “animal mode” but can switch to street legally tame after.
stuff.co.nz

Porsche to conquer LeMans: The 900 hp 919 Hybrid race car has been updated ahead of the WEC competition. Porsche sets out to win the 24 hours of LeMans for the third consecutive time.
automobilsport.com

Asia’s first hybrid ferry serves in Kaohsiung, Taiwan’s largest harbour. The passenger ship is retro-fitted with an electric propulsion system by Finnish Visedo. If the service is successful, the city’s government plans to replace the rest of its diesel fleet with hybrid ferries, too.
greencarcongress.com, mpropulsion.com