BMW battery breakthrough: The German carmaker readies new battery technology based on solid rather than liquid electrolytes. The initial target is up to 20% more capacity, less weight and more safety. Alas, the new power packs will not be here before 2026 due to long-term testing prior to introduction.
autocar.co.uk 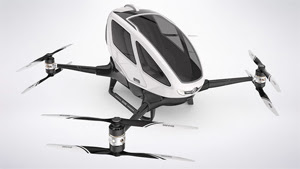 The heli-cab has arrived in Dubai, where a self-flying one-passenger drone has undergone “road” testing. The hover taxi is set for take-off in July if the Emirates’ authorities play along. Made by Chinese E-Hang, model 184 can travel at 100 kph (60 mph) in 300 metres altitude for about 30 minutes.
phys.org

Macro scale: Battery maker Microvast says 15,000 electric and hybrid buses running in Europe and China utilise its battery technology. Half were only added during the course of 2016. Now, Microvast has set its eyes on the U.S. market, where it will found a battery facility in Texas.
ngtnews.com

Rubbing shoulders: Mahle acquired O-Flexx, a start-up for thermoelectrics. It specialises in thermoelectric elements, which are used to warm the cabin of EVs for example.
evertiq.com