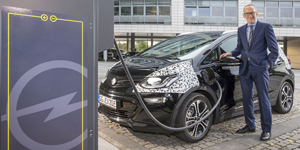 Opel CEO steps back: Karl-Thomas Neumann has left Opel with immediate effect but it looks like he had good reason to do so. Already VW has reached out to its former head of electrification and might hand him the helm at Audi although nothing has been said aloud. Instead rumours are making the rounds, reasoning Neumann’s resignation was due to PSA not having understood his wish to turn Opel into an all-electric brand. The problem is however, that PSA does have a clear EV strategy in place but it is driven by its Chinese backer Dongfeng and its core brands Peugeot, Citroën and DS. In this bigger picture, Opel/Vauxhall is likely to serve only as long as cheap ICE still sell and that is surely no job for Neumann. He had been fighting for electrification already at VW in the early days. Maybe it is time for a second round and with more support for his corner. Dr. Ralf Hannappel responsible for the Ampera-e is leaving Opel by the end of this month as well.
electrive.net (in German), autonews.com

Quota EV: Audi plans to bring the Q2 in an electric version to China by next year, Automobilwoche reports. The compact SUV’s EV variant would be exclusive to Chinese buyers, making it look as if the NEV quota has had some effect already.
automobilwoche.de (in German)

Geely enters sports: Volvo performance label Polestar ponders a range of electric sports cars with the first model to appear within this year. Owner Geely aims to copy AMG in its approach and the electric Polestars are to build on Volvo platforms such as SPA and CMA but shall stand alone on sportier grounds. In the long run, Geely wants to dispose over a line-up of different brands to match VW and already has Volvo, Lynk but also the London Taxi Company while eying British Lotus as well.
autoexpress.co.uk

Clearly Honda has got no high hopes for its Clarity BEV that will become available in California and Oregon as lease-only offering. An 89 mile range and 35,000 dollar price tag are not a good segment to be in, in a world in which the Chevy Bolt and soon the Model 3 exist.
electrek.co, insideevs.com

Talking competitive pricing, ZEV Electric started deliveries of its 5,700 dollar electric car. The T3-1 Micro vehicle sits three and has been designed specifically to be the lowest cost EV on the market. That comes at the price of performance though and the little fella does no more than 35 miles at 30 mph.
pressreleaserocket.net, zelectricvehicle.com

Nissan Leaf in the UK.