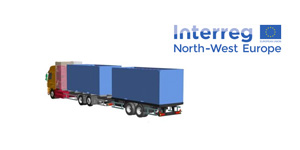 European hydrogen truck: H2Share is an EU project led by Dutch WaterstofNet with the aim to build a 27t hydrogen truck and a mobile H2 refueler. German VDL signs responsible for truck development while the refill is to be delivered by Wystrach by March 2020. The heavy duty FCV will then go to tests at six locations in the Netherlands, Germany, Belgium, and France.
waterstofnet.eu

Stanford dynamic charging: Scientists from Stanford University are looking into wirelessly charging moving objects. While they have so far managed to charge an LED light over 90cm distance rather than a car, their approach to induction is new as it eliminates the radio-frequency source in the transmitter and replaces it with a voltage amplifier and feedback resistor. It automatically adjusts the voltage based on the response it gets from the receiving circuit.
stanford.edu, sciencealert.com

Autonomous shuttle service: Helsinki is about to launch a self-driving bus line called RoboBusLine that will integrate into the Finnish capital’s regular transportation service from August. It will mark one year of the Sohjoa EU project that tested two EasyMile EZ10 electric minibuses in Helsinki.
inhabitat.com, archdaily.com