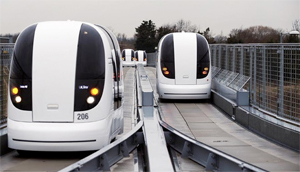 Personal Rapid Transit for UAE: Ultra Fairwood, a JV between Fairwood and ULTra Group will construct a huge network of autonomous electric vehicles at Ajman City in the United Arab Emirates (UAE). The vehicles will be made in India and can carry from 6 to 30 persons. The project is estimated to be worth 1.6bn dollars with a planned 1,745 vehicles serving 115 stations on the PRT network.
swarajyamag.com, india.com

Cummins to electrify: The supplier answers calls for more electrification and wants to strengthen its electric and plug-in hybrid drivetrain portfolio from 2019. Cummins recent development partnership with TM4 thus only marks the start and other partners may come on board as well.
insideevs.com

Hybrid Home at sea: Heesen Yachts has delivered its first hybrid yacht to its owner. HOME (formerly Project NOVA) measures 50m and silently makes over 9 knots in silent electric cruise with its 127kW drive that is water-cooled naturally.
electricvehiclesresearch.com

Green bus on acid: Today TU Eindhoven presents its electric bus that gets its “fuel” from splitting formic acid. The team FAST’s ant’s secretion is made from CO2 and hydrogen, both from renewable sources, and stored in a trailer dubbed REX. Hydrozine the students call their invention that could prove rather revolutionary given that synthetic formic acid is usually made from petrol. FAST however hopes to get a first production facility running next year together with Volta Chem and to also build a smaller generator.
wallstreet-online.de (in German)

EV Sales in the U.S.