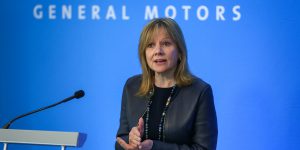 GM to build more electric cars: GM CEO Mary Barra says they are working on a dedicated EV platform that is to hit the market before 2020. The new architecture will also accommodate for extended over the air updates like Tesla’s.
autonews.com, gmauthority.com

Model 3 for 25,000 dollars: California has included Tesla’s latest EV in its list of electric cars eligible for incentives, bringing the cost of the Model 3 down to 25,000 dollars after the federal tax credit, which is likely to begin phasing out for Teslas at some point next year. Meanwhile the EV maker sent an email to employees who had reserved a Model 3. Tesla confirmed they would be prioritised but warned that they must not be resold for more than the original price if at all.
electrek.co (California), teslarati.com (employees)

EV start-up get-together: Several small Chinese EV companies plan to form an alliance to save time and money and to make a stronger stand in a warming market. Singulato Motors, WM Motor, CHJ Automotive, Hongxing Automobile Manufacturing and Aiways have been talking for months, reports Reuters, and they believe an agreement could be reached by late September that may result in a shared EV platform before the year’s end. The manufacturers said they would welcome OEMs on board as well.
reuters.com

Proterra got a new production facility for its electric buses set up in the Los Angeles area in order to serve West Coast transport providers quicker. Until now, all of its electric buses have been built in South Carolina. Proterra’s California plant is able to make 400 battery-electric buses a year.
sfgate.com, forbes.com

Spy shots show Audi’s upcoming plug-in hybrid, the Q5 e-tron quattro, that is likely to land on the shelves by 2018. Electric range was given at 31 miles, 2 miles above its predecessor and just enough to squeeze into Chinese New Energy Vehicle regulations.
autocar.co.uk

German take over: Swiss Biketec, known as pioneer of premium pedelecs under their Flyer label, is to be acquired by ZEG, a German buyers community. They want to keep Flyer as independent premium brand and Biketec too is to remain a stand-alone business. ZEG has continuously expanded its portfolio and Flyer is the last in a line that includes Hercules, Bulls, or Kettler among others. Biketec welcomed the move and hopes to tap into ZEG’s distribution network that reaches into BeNeLux and Austria as well.
velomotion.de (in German)