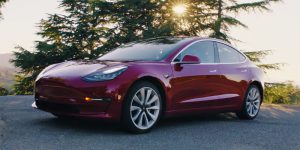 Game on for the Model 3: Tesla presented the serial version of its Model 3 and already delivered the first 30 vehicles to their new owners. In the beginning two versions will be offered with a range of around 350 and 500 km, which will be sold starting at 35,000 and 44,000 dollars, before subsidies. More than 500,000 pre-orders have already been placed with Tesla.
electrek.co, insideevs.com, autonews.com, youtu.be (the launch)

Stuttgart rules for clean air: German environmental organisation Deutsche Umwelthilfe (DUH) has won their case against the city of Stuttgart due high air pollution level. The administrative court now expects “the fastest possible measures for air pollution control” and thus makes way for the city, to go ahead with planned (partial) diesel bans from 2018.
electrive.net (in German)

FCA jumps on the electric train: Fiat Chrysler CEO Sergio Marchionne, known as being an opponent of electrical vehicles, now announced plans to electrify more than half of the company’s portfolio by 2022. With Maserati, he even plans to electrify all new vehicles as of 2019.
autonews.com

More E with Cadillac: The GM luxury brand has announced more SUVs and both hybrid and electric models, while building less sedans at the same time. The electrification plans are “not dissimilar to what Volvo has announced,” said Cadillac boss Johan de Nysschen. The plan will only be put in motion during the second half of 2020 however.
reuters.com

Daimler to start eCanter-Production in Europe: The Tramagal plant in Portugal has secured the Fuso eCanter production. The e-trucks that are usually produced in Japan, will be offered in the coming months to clients in Europe and North America. The global launch is set in September in New York.
daimler.com

ICE ban in Switzerland? The Swiss Green party has proposed to ban sales of diesel and gasoline-powered vehicles, starting already in 2025. Regula Rytz, the party’s president will present the demands to the traffic and environment committee in the next step.
20min.ch (in German)

Porsche enters Formula E: After Audi, BMW and Mercedes, Porsche decided to join the electric racing league by 2019. At the same time, Porsche announced the end of its engagement in the LMP1 after the current season.
electricautosport.com, autocar.co.uk

The Sion is here: Sono Motors has officially launched its solar electric car Sion in Munich with first deliveries expected in 2019. Its 330 integrated solar cells produce enough electricity to add around 30 km of range per day in addition to the 250 km it carries in its 30 kWh battery. Once Sono Motors receives 5,000 orders, production will start at an external manufacturer.
insideevs.com, theautochannel.com