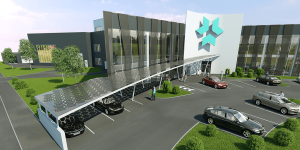 Kreisel’s battery plant about to open: Production lines in the new 7000 square metre Rainbach-based facility of Austrian Kreisel Electric will start to roll in September. That is what the specialist for EV battery packs and storage systems announced in a press release. Thus, a fully-automated production line for the company’s home storage system Mavero has already been erected. The first 500 units of several thousand reserved systems shall soon go into production.
dropbox.com

Toray to produce separators in Europe: Japanese chemicals company Toray Industries intends to manufacture its separators for lithium-ion batteries also in Europe by 2019, Nikkei has learnt. With this strategy, the company wants to be one step ahead of rival Asahi Kasei. Currently, Toray is said to compare possible sites for its factory plans – in East Europe but also in Germany. Additionally, it considers building another separator production facility in the States.
asia.nikkei.com

Daimler invests in Volocopter: German aviation company Volocopter gathered 25m euros in its latest financing round. Among its investors is also Daimler and Berlin-based technology investor Lukasz Gadowski. The new cash shall boost the development and market launch of Volocopter’s electric flying taxi. As reported, the company intends to start demonstration flights in Dubai before the year’s end.
europe.autonews.com

Longer lasting batteries through V2G: Researchers of the University of Warwick have observed that EVs with vehicle-to-grid systems are capable to provide energy to buildings without harming their own batteries. They even claim that EVs serving as mobile energy storage units benefit of a battery performance boost of 10 percent.
businessgreen.com, sciencedirect.com