BYD is to increase its battery production capacity massively and gears for 20 GWh already this year. That is about three times more than the 2016 level and the Chinese manufacturer thus seeks to prepare for rising demand. 20 GWh are enough to power more than 400,000 electric cars for 350 km and not too far from Tesla’s Gigafactory, that aims for 35 GWh by 2020.
automobil-produktion.de (in German) 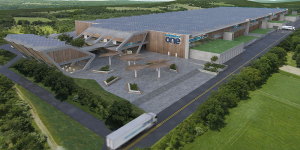 Australian battery factory: Energy Renaissance has turned to the government to be able to go trough with its plans for a mini Gigafactory down under. Planned capacity is 1GWh with the plant to be located in Darwin. For cells, Energy Renaissance builds on simple tech with a semi-solid electrolyte from the A123 spin-off 24M Technologies with which the start-up says it has an exclusive partnership.
greencarcongress.com, renaissanceone.com.au

Retro racer revealed: Infiniti has indeed brought an electric concept to Pebble Beach as promised. The Prototype 9 uses the 2018 Nissan Leaf technology but with its tail shaped by hand and open wheels, it will remain a stylish but one-off show off.
electrek.co, electriccarsreport.com, motortrend.com