Ford wants to team up in China to build electric cars together with Zotye. Their EV joint venture shall run ints own dedicated brand to develop and produce electric vehicles for the People’s Republic but details such as the name or production volume will only be released once the deal is sealed and authorities have given their go. Ford reportedly intends to offer 70 percent of its models in China as electrified variants by 2025.
ford.com

Daimler’s electric IAA line-up: Those flogging to Frankfurt next month will live to see Mercedes’ first all-electric EQ Concept targeting the compact car market. It will be joined by the GLC F‑CELL EQ Power PHEV also on show at the IAA. Furthermore, Daimler promised an autonomous Smart ED, again a study, as well as the Mercedes-AMG Project One in a near-production version though and still with hybrid technology derived from the Formula 1.
greencarcongress.com, daimler.com 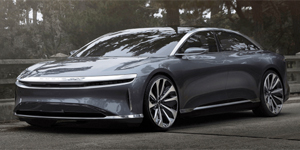 Launch Edition of the Air: A two-colour design is what Lucid Motors calls the Launch Edition of its Air, which is limited to 255 pieces. Actual on-sale is now set for 2019 with the top version coming with 735 kW and a range of 640 km for 100,000 dollars. The base-level Air is not quite half the price with 60,000 dollars but got less than half the power with 294 kW but still a 385 km range.
paultan.org

Electric minibus: VDL Bus & Coach is working for the MidCity Electric to be ready next year. Measuring eight metres and being fully electric, the vehicle is destined to serve in city-centres and also less densely populated areas. The 87 kWh battery can store enough energy for 220 km.
vdlbuscoach.com

Electric mini car: BAIC has published some pictures showing its ArcFox Lite that is set for launch this October. The small EV got a range of 200 kilometres at 36 kW and while no price has been set, it targets young buyers so won’t be too pricey.
carnewschina.com

Ford has introduced a scrappage scheme for old vehicles in the UK but rather than encouraging a switch to hybrid or electric cars or vans, a new Euro 6 is enough to be eligible for up to 4,000 pounds.
autocar.co.uk, autonews.com