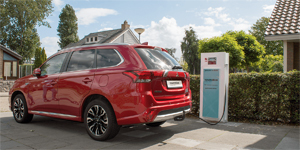 V2G pilot in the Netherlands: Nissan and Enel have expanded their V2G activities as they hook up with NewMotion and Mitsubishi to come to the Netherlands. Grid operator TenneT is on board as well and the Outlander PHEV serves as bidirectional charging test mule. The first V2G station is live.
electriccarsreport.com

EV tech for driving in the cold: A new control strategy can restore EV battery power and permit full regeneration while driving at temperatures as low as −40 °C, thanks to Researchers at Penn State and a practitioner from EC Power. The method involves heating the battery internally during regenerative braking and rest periods of driving.
greencarcongress.com

Electrode made in the microwave: Lithium cobalt phosphate is the latest material to be praised as promising material for cathodes and could now be made easier than ever. Researcher Jennifer Ludwig of the Technical University of Munich (TUM) has developed a method to synthesize high quality crystals at low cost by microwaving it.
tum.de

Another battery out of the kitchen comes from Stanford, where researchers have developed a sodium-ion battery based on a compound related to table salt. Its cost is less than 80 percent of a lithium ion battery with the same storage capacity.
greencarcongress.com, stanford.edu