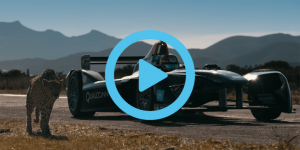 This must be the most unusual Drag Race the world has seen to date as it pits an animal versus the machine. But not any animal and not any machine. It is the Cheetah racing a Formula E electric car but not just for fun.

This competition had a more serious background though and is actually a run for life. The Formula E shot the video to raise awareness of endangered species together with three conservation organisations from South Africa.

The Cheetah seen racing in the video is tame but no less fierce. It “accelerates” and takes the lead but loses to the electric race car in the long run – narrowly though and due to the car’s top speed of 225 kph compared to the animal’s max of about 112 kpm. It most definitely wins on grace.

The cheetah, the fastest mammal on our planet is also one of the rarest ones. According to the World Wildlife Fund (WWF), a loss of habitat, reduced prey and direct persecution makes the wild cats most vulnerable and only about 6,700 remain in the wild. By the way, December, 4 is the international cheetah day.