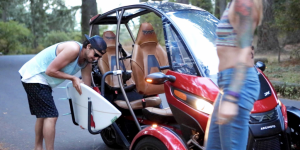 U.S. manufacturer Arcimoto has handed over the first model of its serial version three-wheeled EV called SRK on the sidelines of the LA Auto Show. The base version of the SRK reaches up to 100 km, a more performant version up to 200 km.

Pricing starts at 11,900 dollars. Earlier this year, Arcimoto already went public and opened a production facility close to its headquarters in Oregon.

Founded in 2007, Arcimoto is now launching its first serial vehicle in North America. The SRK is supposed to be both, practical and fun. It is equipped with a dual-motor drive and reaches a top speed of 130 km/h.

New A-class series to include PHEV