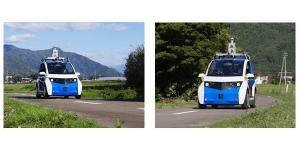 Panasonic and the Japanese temple town of Eiheji have embarked on an experiment with a newly developed autonomous EV commuter vehicle running along a walking trail.

Pilgrimage has just become much easier for the ageing population of the town of Eiheji in Fukui Prefecture, Japan, where Panasonic is running field tests with a new autonomous EV.

Its area of operation is “naturally” designated for autonomy as the so-called commuter EV is driving up and down a disused railroad turned walking trail. The 6 kilometre route leads to the Daihonzan Eiheiji Temple and the community has received subsidies from the national government for regional revitalization that includes making the route fit for the electric shuttle.

For Panasonic it is the first public outing as it had only tested its autonomous technology in-house before. Eiheji thus offers an environment equivalent to a public road and Panasonic also aims to verify how autonomous cars can be used commercially in the future.

Testing will continue throughout the end of March 2019. Trials aim to test operations such as positioning of the vehicle and camera detection performance, obstacle avoidance and braking to prevent collision with pedestrians entering the road suddenly, and the system using cloud servers.
news.panasonic.com

Porsche to specify its next EV project in 2018