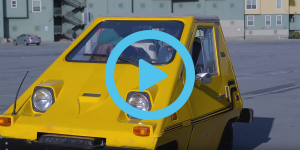 Simone Giertz, best known for her “shitty robots” teamed up with another fun-loving Youtuber to turn an electric car into a gigantic computer mouse in working mode. They christened their unlikely conversion Cheese Louise and reveal its perks in a video.

The Comuta – note its closeness to computer – is a very early take on an electric commuter car by Ford and was a rather strange sight already back in the 80ies. It has become a tad stranger now that Giertz has turned it into Cheese Louis with the help of William Osman, a nerd in his own rights.

Their oversized computer mouse however is not just a fun invention but actually took a bit of technical ingenuity. How to display sideways movements for example if the car, or car mouse, is not drifting for example?

To get around this, Osman attached a mouse to his computer along with a magnetometer, which acts like a compass and tells the system which direction the car is facing. He also fitted a new lens to the mouse, so that it could pick up movement in some distance away. The mouse click was connected to the car’s horn “in a nice touch,” as Alphr called it so avidly.

The two then took the whole construction to the test with rather mixed results. Simple tasks like sending an email became an almost hazardous undertaking and also typing is anything but fast. That’s it with the benefits of electric acceleration but Cheese Louise sure shows a new level of connectivity.

Quote Simone Giertz when asked if her electric car is safe: “No, not at all.”

Electric speedboat for kids and grown-ups too