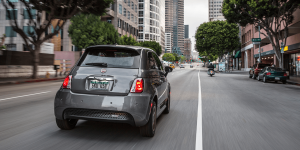 The U.S. Department of Transportation has finalised rules that will require “quiet cars” such as electrified vehicles to emit alert sounds while driving on low speeds. Yet, the deadline for full compliance has been extended by another year, to 2020.

The regulation is to protect pedestrians, cyclists, and the blind from silently approaching vehicles. The limit is set at 30 kph, a speed at which the noise of the tires or wind resistance is not yet loud enough to be heard. Nissan argued that an audible alert was only necessary up to 20 kph, yet the NHTSA did not agree.

Even though full compliance has been delayed, carmakers must have the sounds in 50 percent of their hybrid and electric vehicles by September 2019 in the States.

It is not only the U.S. but a worldwide movement. Rules by the UN’s World Forum for Harmonisation of Vehicle Regulations require hybrid and electric vehicles to audibly indicate their approach at speeds of up to 10 kph, a noise with 50db is obligatory. Sounds of 56db signal speeds of up to 20 kph and 47db are the norm for when in reverse. The suggested tone is a “retro-futuristic humming”.

In preparation, Mercedes AMG has taken a humorous approach and asked Linkin Park to help make some noise for their hybrid range, even though those cars are surely not made for low speed driving. Instrument maker Roland was on the case as early as 2015 to create “ingenious neo-futuristic” sounds for the GLM ZZ electric sports car (we reported).

In fact our archives reveal a few rather funny takes on the whole world of EV sounds. Tesla employees had to maintain a Model X making strange sounds that turned out to be a kitten caught inside the bumper. Robert Llewellyn actually tested the matter for real, when he met Andre Louis, musician, sound engineer and born-blind man, who was indeed trying hard to hear the sound of silence.