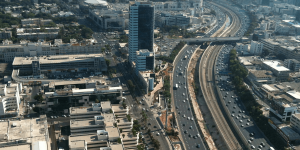 This marks a new direction for Israeli green technology and also means that no more petrol powered cars would make their way into Israel. Says Steinitz, “We intend to reach a situation in which Israel’s industry will be [using] natural gas, and most important, transportation in Israel will be based on natural gas or electricity”.

Steinitz based his decision on an OECD report, which stated that 2,500 Israelis died from the results of air pollution in 2015 compared to 350 who died in traffic accidents last year.

The energy minister plans to submit a master plan for review by the government soon.