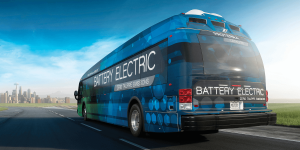 The San Mateo County Transit District (SamTrans) has ordered 10 electric buses from Proterra, which will replace 10 diesel buses. It’s the agency’s first such order of many more to come, as SamTrans wants to electrify its entire bus fleet by 2033.

The ten buses ordered are of the Catalyst E2 type and 12 metres long. The battery pack has got an energy density at 160 Wh/kg and 260 Wh/L, Proterra says.

For SamTrans, the new buses which are due to go into service by 2019, will operate on a number of routes in San Mateo County. The agancy wants to electrify the entire fleet by 2033.