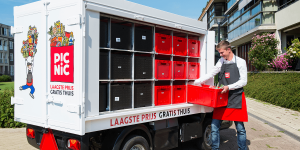 Picnic, the Dutch startup that delivers groceries with a fleet of only electric vehicles is about to make business in Germany. Several cities have been selected to start what might turn into a Europe-wide movement.

Picnic has been rather successful from the start when it collected 100 million euros in funding shortly after starting its web-based shopping service in the Netherlands. Now neighbouring Germany is on the list.

Picnic selected a few cities to start with, namely Kaars, Neuss, Meerbusch and Oberkassel (part of Düsseldorf’s district 4), where consumers can order groceries online using the Picnic app. After that, further expansion will take place, starting in North Rhine-Westphalia, which has a population of about 18 million people.

The company’s business model builds on sustainability in so far as that they use local distribution centres. In Germany, these centres are in Viersen and Neuss. From there electric cars pick up individual orders to carry them further into town and to the clients, all with zero emissions.

In the Netherlands, Picnic delivers groceries in about 30 cities and most of them are located in the central-western part of the country.