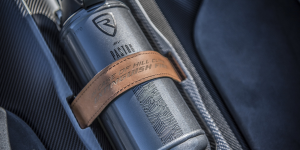 Former Top Gear presenter Richard Hammond has had a hard time coming to terms with electric supercars. There was a fallout with Tesla during testing on the popular TV show, and Hammond has repeatedly voiced his dislike of electric vehicles.

One of his last “stunts” saw him destroy a rare Rimac Concept One completely. During an episode of his new show, Hammond drove the Rimac Concept One up in the Swiss Alps, before dropping it hundreds of feet in an accident. Luckily, the TV presenter was able to escape with some scrapes and a broken leg. The car however, burned to a crisp.

This prompted the Croatian car manufacturers to include a new fire extinguisher in the Rimac C_Two bearing a message: “In case of hill climb, extinguish fire.” Hammond is reportedly delighted at the dark humor, stating that: “I’m delighted. I’ve always wanted to have a real influence in car design. And now I have.”

We still recommend not trying to drive the vehicle off a cliff, however.