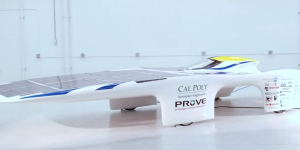 Students at the Prove Lab of the California Polytechnic State University presented a prototype of a solar electric car that has no battery. Still it can reach 105 kph as it is super light and boasts 605 solar cells arranged to break records.

The car is named Dawn and has been geared to break the solar powered speed land record. Accordingly, Prove Lab’s prototype is to run as fast as 100 kph without the help of a battery. Instead power comes from a 2kW solar array consisting of 605 individual sunpower solar cells, the same that were used to fly the Solar Impulse II aircraft around the world.

For Dawn, these solar cells were arranged in an extremely aerodynamic way that is the result of 2 years of development and wind tunnel testing. With the heavy power pack missing, the solar car weighs less than 200 kilos even with a driver on board as it uses aerospace-grade carbon fibre.

Its electric motor is around 97% efficient and designed for speed. The current world record for a purely solar-powered car is 90 kph and ‘dawn’ is specified to reach 105 kph, or 65 miles which is a typical freeway speed limit in america. However, the solar prototype is not fit for production but a showcase of sustainable mobility. Dawn is to rise to the challenge of its record run this June.