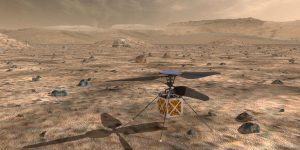 NASA is thinking far ahead and has a project with transport potential on Mars sorted before any passengers have even reached the red planet. Whilst the Tesla Roadster is on its way through space, NASA engineers have come up with the Mars Helicopter that will accompany their rover by 2020.

After a four year design period, the Mars Helicopter is finally ready for takeoff. The vehicle itself weighs in at only 1.8 kg, is carried with a fuselage about the size of a softball. The thin, counter-rotating blades rotate at near 3,000 rpm, or about ten times that considered normal in earth’s atmosphere.

To power the helicopter, lithium-ion batteries were installed, complemented by solar cells for charging. A heating mechanism was also integrated for the cold martian nights. Due to the distance, the helicopter is also autonomous, as no real-time piloting is possible remotely.

The helicopter will not need to cover any major distances though. As the atmosphere of Mars is about 1% of that on earth, the helicopter will have to take off in conditions similar to 100,000 feet in the air on earth. The pilot project will make a series of five flights in increasing distances up to a few hundred meters, starting with a maiden voyage of a height of 3 m, where it will hover for 30 seconds before descending back onto the surface. It will “determine the habitability of the environment, search for signs of ancient Martian life, and assess natural resources and hazards for future human explorers.”

While the project is considered “high-risk, high-reward”, NASA and Texas representatives have been optimistic regarding the future of the Mars 2020 mission and the helicopters maiden flight. State representative John Culberson foresees a lasting, positive impact on the community: “This exciting and visionary achievement will inspire young people all over the United States to become scientists and engineers, paving the way for even greater discoveries in the future.”

Meanwhile, Thomas Zurbuchen, Associate Administrator for NASA’s Science Mission Directorate, seems to think the technology and mode of transport highly viable for future utilisation: “Exploring the Red Planet with NASA’s Mars Helicopter exemplifies a successful marriage of science and technology innovation and is a unique opportunity to advance Mars exploration for the future.”