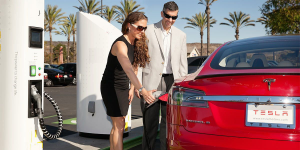 The Egyptian company Revolta Egypt has stated that it will be possible to charge an electric car everywhere in Egypt by 2020. The first phase started in February with stations being built along the Cairo-Suez road.

As part of a major electrification effort, Egypt is ramping up the infrastructure for a popular electric mobility market. The first phase also includes the establishment of 65 stations in Cairo, Giza, Alexandria, Port Said, Ismailia, Suez and the Red Sea.

The second phase will begin next year, where the Delta will be addressed, before the third phase will construct charging infrastructure in Sinai and Upper Egypt in 2020. Ultimately, 300 stations are planned to cover most areas in Egypt by 2020.

While this does not quite cover the ambitious claim, the project is progressing quickly at a cost of 60 million EGP. The second phase will also see the introduction of 1,000 electric cars into Egypt.

Revolta will first import a batch of 25 vehicles, of which only five are new, and has reportedly received numerous requests to reserve vehicles, however reports indicated; “it is proceeding according to its schedule, which prevents it from allowing many cars on the road before completing the stations.” Furthermore, CEO Mohamed Badawi said that the demand for assembling electric cars in Egypt is promising but premature as the industry is only starting now.

New Tesla Supercharger with up to 250 kW performance