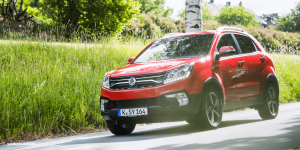 The first electric model by the Korean manufacturer SsangYong will be an electric version of their new Korando, which will go on sale next year with a combustion motor. The debut of the EV version will take place in 2020.

This was reported by Autocar with a reference to SsangYongs UK boss Nick Laird. According to him, the electric version of the SUV is inspired by the e-SIV concept presented at this year’s Geneva Motor Show. The e-SIV features a 140 kW motor and a 61.5 kWh battery for a 450 km range.

SsangYong is also considering a hybrid-diesel version of the Korando. If vehicles with that kind of motor will actually go into serial production is however still undecided.

SsangYong, who themselves are a subsidiary of the Indian vehicle manufacturer Mahindra, has made several headlines in recent years regarding their electrified vehicle concepts. Next to this year’s e-SIV, the manufacturer presented the Tivoli EV-R in 2015 in Geneva and the concepts KEV1, KEV2 and e-XIV from 2010 to 2012. They have so far not developed a serial production, which will now change.