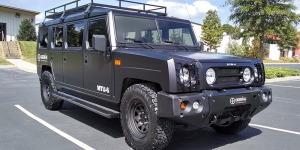 U.S. company Green4U Technologies is going to Honduras to set up shop for making electric cars. They agreed with the government of the Central American country and plan to invest 20 million dollars over the first five years.

Reuters got the news from an official statement by Honduras’ government. Green4U Chairman Don Panoz signed the MoU that foresees investment of about 20 million dollars over the first five years. For Honduras, such a production facility would be the very first and might bring some development to a region under duress.

The 80 year old entrepreneur and motorsports millionaire Panoz stressed in the statement the company wanted to base its operations in a community of 40,000-50,000 people. So far, they were considering three locations near to a port on the Atlantic coast.

Green4U Technologies wants to launch two all-electric SUVs, possibly this year. Both, the MTU-6 and the Enov, shall be able to reach a range of up to 370 km. In future, the U.S. company plans to create other electric models such as sedans, vans and utility vehicles (we reported).