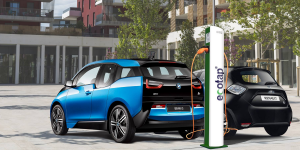 Allego and Ecotap received the concession to install and operate 4,500 electric car charging points across the Dutch provinces Gelderland and Overijssel. 43 cities participate and the rollout will increase the number of charging sockets fourfold.

The installation of the first charging points will begin after summer. As the network relies on the grid and is quite extensive, the partners say they will proceed “as smartly as possible,” using electricity from renewable energy sources for example and managing peak loads.

Ecotap is the “main contractor” of the project, explains their CEO Kees van Bergen. He adds “it is great to have Allego as a provider of charging solutions as they are the specialist within the field of public charging”.

Electric car drivers can request a charging point from Allego anytime. For both partners, the project is a large scale undertaking with which they are hoping to prove their abilities to other provinces or countries in Europe as well.

Allego says they already operate a network of multi-standard fast chargers throughout the Netherlands, Germany, Belgium, the United Kingdom and Luxembourg. It now includes more than 8,500 charging sockets in urban areas and along major roads. The company has also set up an EV Cloud Services Platform for both businesses and EV drivers.

Ecotap is a Dutch manufacturer of charging systems for electric mobility with a wide range of both AC and DC charging stations. Founded in 2011, Ecotap has designed and produced both the hard and software themselves.

It is the first such cooperation between Ecotap and Allego. The latter has recently made a deal with LeasePlan as well that reaches across eight markets in Europe. Their electric car drivers will get access to the Allego network and also receive support in installing new charging stations at home and at the workplace (we reported).