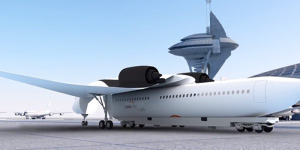 For French firm Akka, flying cabs are not enough, and they have decided they want to transform aircraft into trains.

The concept involves a plane landing on a runway, before shrugging its wings off, and continuing transit as a train. The shape is similar enough, and the concept would address last-mile transportation issues and “hasten turnover at airports and make boarding easier and closer to passengers’ homes”.

As far reaching as this may seem at first however, the concept they are pitching to Boeing is anything but future-safe as Akka’s train/plane would run on fossil fuel. This does not seem to bother CEO Maurice Rikki, who is convinced that planes will follow when cars have gone electric and autonomous, stating: “Planes need to become more efficient, less polluting and less noisy. Our role is to point our customers to technologies of the future.”