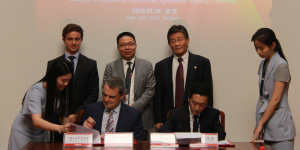 The Chinese solar company Hanergy has set up a strategic cooperation with Bolloré subsidiary Bluecar through their own subsidiary Donghan New Energy Automotive Technology to develop and produce solar electric vehicles.

That isn’t all though: The partners also plan to set up research centres, production facilities and other projects around the globe in Asia, Africa and America. They also plan to cooperate on the development of solid state batteries.

Hanergy has specialized on the the production of thin-film solar panels. Two years ago, the copany presented four vehicles fitted with the thin-film solar panels, whose production was to start within three or four years. At the time, Hanergy stated that it was possible to charge a vehicle for a 80 km range through 5 to 6 hours of simple sunlight exposure. Other cooperations by the solar cell manufacturer included Audi, BAIC and FAW.

Now the partnership with the Bolloré subsidiary may bring the hoped breakthrough. Bolloré announced their plan to put personal vehicle production on the backburner, instead focusing on other capacities including batteries and utility vehicles. Bolloré most recently made headlines with the dissolution of their Autolib EV sharing service in Paris.