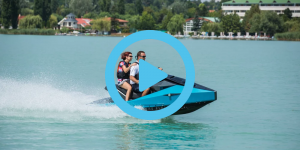 The Hungarian firm has presented their concept fully electric jet-ski. First tests on the Balaton have already been completed, according to Narke. The price and the release date have not been announced yet, however.

The jet-ski contains a motor developed in-house by Narke, which features 45 kW performance and a top speed set to 55 km/h. The exchangeable lithium-ion battery pack is said to be sufficient for 1.5 hours of “normal” use, and chargeable to 80% capacity within two hours. The design is notably square with clear-cut corners, while the acoustic experience offered is significantly quieter than conventional jet-skis.

Narke is not the first company with the idea to electrify small watercraft – Hyundai showed off a concept called the Kite Concept Car, which is capable of driving both on land and in water, as the vehicle can transform from a two-seated electric buggy to a single-seat jet-ski in a few short moments. Another more recent example is the electric surfboard developed by Swedish company Awake, that eliminates the need for waves entirely.