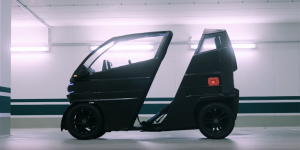 The Düsseldorf company iEV1 GmbH has presented a single-seated mini BEV named the iEV X, which can extend itself thanks to flexible vehicle architecture. At full length, it can house two persons and luggage. Currently the company is in the middle of a crowd-funding campaign to fund production.

The iEV X is extendable in the truest sense of the word: the “short” configuration has the vehicle standing at 78 cm width and 1,60 m length. This is six to seven times smaller than conventional personal vehicles.

While the width is not variable, a motorized mechanism extends the mini BEV to a length of up to 2,20 m, where the body is split with a hollow space in the middle. The hollow space is not contained by the chassis, however, as can be seen in the following video.

Regarding technical specifications, the developers had this much to say: The basic model will feature a 48 volt battery, allowing for a 40 – 60 km range. Top speed was clocked in at 45 km/h, and a solar panel on the roof contributes additional power on the road. Charging the battery takes about 3 hours, according to the manufacturer. The vehicle price has been set at 3,850 euro.

A more powerful version of the vehicle, named the iEV X+ will have a 72 volt battery, allowing for a range of 80 to 120 km, and a top speed of 60 km/h. Further additional options include an automated charging system, and a pedal system to further extend the range. The price of the iEV X+ has been set at 7,850 euros.