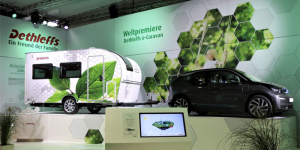 Dethleffs presented their concept for a fully electric motorhome fitted with solar panels at last year‘s Caravan Salon, and have followed up this year by presenting a fully electric caravan trailer named e.home coco.

The company is addressing the issue that the batteries of electric vehicles will likely not suffice to power both the vehicle as well as a camper trailer being pulled. The trailer has its own motor and power supply, which can then lower the load being placed on the EV in front.

An intelligent control mechanic manages the motor and cuts the tow weight to a previously defined number. So instead of towing the full weight of the trailer, which Dethleffs put as a 2,000 lbs example, the vehicle would equalise and put a strain of only 220 lbs on the pulling vehicle.

The 80 kWh lithium ion battery is integrated into the floor of the trailer, powering two 40 kW wheel hub motors. The trailer also features solar panels, which help keep the battery charged. The vehicle was also designed with the intention of using it as a mobile power source.