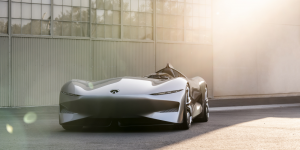 Infiniti has presented a new fully electric concept at the Pebble Beach Concours d’Elegance named the Prototype 10. This will be Infiniti’s first fully electric vehicle.

The Nissan subsidiary presented their first fully electric car, which they say “captures the spirit of early speedsters”. The vehicle has a unusual design, featuring an open cockpit and only one seat, backed by a triangular fin and covered by a very small windscreen.

Exactly what kind of technology Infiniti placed in the concept is still unknown, and we have not seen any images of the interior of the vehicle, however the exterior design is certainly something else. Despite not mentioning much regarding this vehicle, Infiniti did speak to their electrification plans, stating that “electrified vehicles will comprise more than half of Infiniti global sales by 2025.” Furthermore, all new vehicles introduced after 2021 will have an electric powertrain.