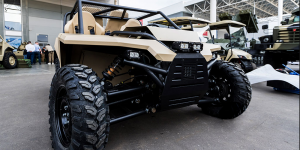 The company famous for the AK 47 rifle has announced that they have developed new military equipment. This time, it is not a gun, though – The Russian company is manufacturing a hybrid buggy named the OV-2, which is capable of accelerating up to 100 km/h.

The news was broken last Monday, when a spokesperson from the company made the announcement. The statement said that “It has been developed in the interests of the Russian Defense Ministry.” According to the official, the power of the rear wheel drive engine is 42 kW, while the front wheel drive electric motor yields 55 kW.

Update 26.08.2018: Shortly after announcing their hybrid military buggy, the company has made another announcement regarding electrified transportation: They have developed a fully electric car with a retro design, which they claim will compete with Tesla. The vehicle is a conversion of a soviet IZh 2125 “Kombi”, featuring a 220 kW electric motor and unspecified battery pack. The range has been stated to be 350 km, with an acceleration from 0 to 100 in 6 seconds.

The journey is the destination