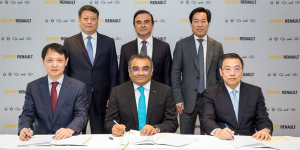 Renault and Brilliance joined forces late last year to electrify the light commercial vehicle market in China. Now they announced their plans that include a lineup of a total of seven electric vans. Three models will hit China within the next two years under the Jinbei and Renault label.

In terms of production capacity, Renault and Brilliance are gearing up for 150,000 commercial electric vehicles a year. Trading under the Brilliance label Jinbei, the first two will cater to both cargo as well as passengers beginning in 2019. before a Renault-branded EV will follow the Jinbei electric van in 2020. The latter is an all-electric makeover of the Jinbei F50 and marks the start of the series of seven such electric vans to come.

Production is set in Liaoning province. To praise the joint venture’s progress, Nissan and Renault CEO Carlos Ghosn remarked: “Ten months after our initial launch of our joint venture in China with Brilliance, we have a local management team in place, LCV product plan to deliver further growth with seven LCVs for China including three electric LCV models, starting in early 2019. Our agreement with the local government in Liaoning province will strengthen our foundation for growth.”

Liaoning Province is one of China’s new automobile industrial hubs with over 120 auto and component manufacturers. Renault and Brilliance formed the joint venture here in early 2018, to manufacture and sell light commercial vehicles under the Jinbei, Renault and Huasong labels reportedly.

On a global level, companies have been reacting to tightened emission regulations, particularly in inner city areas. In Europe for example, Renault has been seen electrifying their commercial vehicle lineup and more heavily so. The Renault Trucks D Z.E. and Renault Trucks D Wide Z.E. cover 16 and 26 tons respectively and are both all-electric vehicles. They join the Master Z.E. at 3.5 tons and will be made in Normandy, France (we reported).