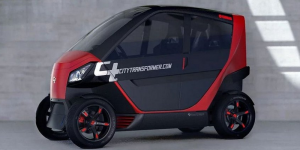 A start-up called City Transformer has developed an electric car designed to tackle two issues, congestion of both the air and streets in inner cities. Their two-seater “folds” at the push of a bottom, reducing the width to no more than a metre. The price too has been set humbly.

City Transformer is based in Israel and hopes to be able to sell their small electric car at a price of around 10,000 dollars. They owe their competitiveness to a comparably small battery that holds enough energy for 150 kilometres. It is a range clearly measured to the use of urban driving the start-up has in mind.

Moreover, the electric car is said to come with semi-autonomous driving capabilities. City Transformer has not given any details other than saying that they believe their electric folding car to be ideal for fleet use as well as car sharing.

When driving, the electric vehicle measures 1.44 metres in width. Once folded – in fact it is a shortening of the wheel-base – said width is reduced to 1 metre at a constant length of 2.35 metres.

City Transformer plans to start producing their electric folding car next year, first in Israel. They then plan to start deliveries at the end of 2019. They may sell and produce in other markets as well but say this depends on demand. On their website, they list various partners, among them Yamaha. A tap leads to a webpage in Japanese so they might aim for launch there in future.

Israel is currently reviewing their transport policies with the aim to phase out fossil fuel-powered cars. The Israeli Minister for Energy, Yuval Steinitz had recently announced his intention to do so by 2030. The Minister said that the government of Israel will aim to create a “critical mass” of electric cars to start with and to move on to full independence from fossil fuels from there. He scheduled the tipping point to come around 2025, when they aim for about 177,000 electric cars on the road in Israel. Today there are just a few dozen electric vehicles.