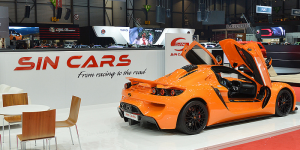 The Bulgarian racing car manufacturer Sin Cars Int. Eood wants to get involved in the electric car business in future. Yet, they do not aim for say the FIA Formula E but have a more down to earth endeavour in mind: electric city cars. And they want to go public.

Sin Cars has hitherto lived on the fast lane and made FIA approved race cars. But with mobility changing, the company from Bulgaria is turning their strategy around as well.

They want to start making electric cars designed for inner city courier services or taxi drivers and they aim for a very competitive price: 10,000 euros. For this amount, the battery will last for not much longer than 150 kilometre, a range that is considered sufficient for urban concepts at the moment.

But for Sin Cars this plan is in fact a double change of strategy. Just this March in Geneva, they presented a first non racing electric car. The S1 is Sin Cars’ fully electric street legal model, with a starting price of 40,000 euros. The impact remained low though and so they are looking into city cars as described above.

In order to finance their push into what they consider the volume market, Sin Cars is planning to float the 5 year old company on the stock market next year. They project an IPO could be worth over 10 million euros (20M lev).

And the company has planned even further ahead. By March 2019, Sin Cars plans to present a new platform that they call L-City at the Geneva Motor Show. Made specifically for multi-use electric cars ranging from passenger cars to small delivery electric vans, it will provide the basis for series production. Starting in 2020, Sin Cars expects to produce 20,000 electric vehicles a year. Their target market are the big cities in Europe.