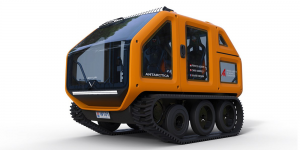 Automobile company Venturi has introduced an electric vehicle designed to withstand the most extreme conditions on Earth. The Antarctica EV is specifically made for polar expeditions and said to still roll in temperatures as low as -50°C.

Venturi had been asked by the Prince of Monaco to develop the zero emission polar explorer for his Foundation. The automobile maker is from the island, hence the royal interest and H.S.H. Prince Albert II of Monaco stressed that “the Venturi Antarctica will be a significant asset for improving our understanding of the polar regions, the first to be impacted by the effects of climate disruption.”

The electric polar explorer Antarctica had been in the making since 2013 and it took Venturi two years to release a first prototype in 2015. Testing of the electric vehicle was done in Europe’s coldest regions although none as extreme as Antarctica of course.

The final spec includes battery cells Venturi initially developed for their electric race cars. In the Antarctica however, they deliver no more than 20 kph max. for a range of 45 kilometres in what Venturi call “realistic operating conditions” of extra sub zero temperatures. Clearly the range had to be limited, just think of the energy needed for heating the cabin. Still researchers will be grateful because before “they had to get around on foot in some areas, in order to avoid polluting them,” explained Gildo Pastor, Venturi’s president.

Venturi further say their Antarctica EV has wheel-mounted caterpillar tracks, two times 60kW power and weighs in at around 2 tonnes. The polar electric vehicle can carry three people, as well as luggage and equipment.

Nothing has been said about the penguin rescuing capability of the Antarctica electric vehicle but the silent drive will sure serve the last bits of fauna on the warming ice well.

The Prince Albert II Foundation is working to ensure that regions affected by climate change can be covered by international agreements that give environmental protection a priority. Since it was founded in 2006, the Foundation has supported around 30 projects aimed at achieving better understanding and better protection of these regions.