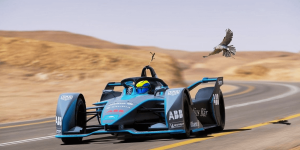 The Formula E film features a peregrine falcon, considered the fastest animal in the world, chasing a bait attached to a next-gen Formula E racing car steered by Felipe Massa.

We are not sure if the specially trained falcon will come to the opening ceremony of the Formula E in Saudi Arabia this Sunday, December, 15.

Why Tesla was almost called Faraday