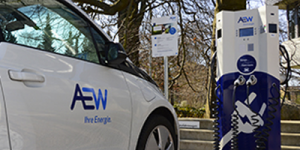 The Swiss charging station network evpass run by Green Motion and FMV has found an new investor in energy supplier AEW Energie. Each of the three partners now owns 33 percent of the company. The fresh capital will accelerate the expansion of evpass’ charging network.

The expansion builds on a total of 1,070 charging stations in 370 Swiss municipalities and the press release states that evpass grows by ten stations each week. That rate possibly made it easy for founder François Randin saying “there is no doubt” that the partners will reach the target to install 3,000 charging stations in Switzerland by 2020.

Moreover, with AEW Energie joining Green Motion and FMW, a provider of hydro energy, there is potential for cross border expansion – AEW also acts in Germany as a utility – but for now all partner said they would concentrate on Switzerland.