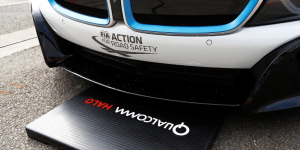 The transaction will make Qualcomm a minority shareholder in WiTricity. And WiTricity, in turn, increases the number of proprietary patents and patent applications related to wireless charging to over 1,500.

“Bringing the Qualcomm Halo technology into the WiTricity portfolio will simplify global interoperability and significantly accelerate commercialization,” said Alex Gruzen, CEO of WiTricity. It is well known that one of the biggest disadvantages of the technology at present is that the inductive stations of the individual brands cannot be used across manufacturers.

WiTricity has just recently signed a license agreement with the German supplier Mahle. However, the Stuttgart-based company is by no means the only one: Toyota, Aptiv (previously Delphi), TDK, IHI, Shindengen, Daihen, Brusa and Anjie Wireless also have licence agreements with WiTricity. At the CES in Las Vegas, the company also presented a wireless V2G charging model based on WiTricity’s DRIVE 11 charging system for the first time with Honda.