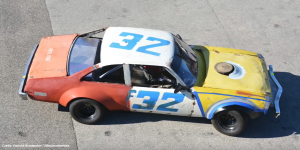 The “24 Hours of LeMons” is a bizarre long-distance race in the USA, in which only cars with a value of 500 dollars or less are allowed to participate. Now they are introducing a category for electric cars.

Careful what you wish for though, the prize money of 50,000 U.S. dollars will be delivered in five-cent pieces to the winner’s front door with a dump truck – free of charge.

Finally, electric cars will be able to compete against conventional engines, although they only need to win against other EVs in order to bag the 50 grand (solid) cash prize. The advantage to electric racers in the LeMons race is that the value of the car does not include the powertrain or the battery in the 500-dollar-value cap.

The new electric car category stipulates that the EVs may be production models cars retrofitted with electric drives. Because of the nature of the race, most electric cars will have to be retrofitted anyway, mostly to include the ability to swap battery packs, which is the only perceivable way to keep an EV in the race without pit stops of an hour or more.

Jalopnik talked to the organiser of LeMons, Jay Lamm, who explained the inclusion of electric cars in the race thus: “I was just in the shower and thinking about this, and thought, man, that’s a great encapsulation: People think they’re a threat, but they’re not. Someone needs to make them understand it’s a boon for enthusiasts all the way around.”

This is surely a sign: when electric cars reach the more remote crevices of motoring fun.

It’s just Japan on the moon