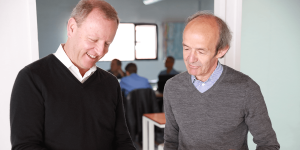 According to the German newspaper Automobilwoche, Magna will take over the production of Evelozcity’s electrified vehicles and possibly build a production facility in the USA. A letter of intent has already been signed. However, both companies have not yet officially confirmed the potential cooperation.

In total, Evelozcity wants to offer three purely electrical models starting from 2021. The three electric vehicles will be a commuter vehicle, a delivery vehicle for the last mile and a ride-sharing BEV. They will be built on a common platform, which should already be fully developed. But instead of producing the vehicles themselves, a contract manufacturer is to take over.

But according to the report, there isn’t that much competition for the spot among contract manufacturers. In addition to the three companies Magna Steyr, Valmet and Nedcar from Europe, AM General from the USA is in the mix for consideration. Magna Steyr could now win the contract. The Graz-based company has at least already gained experience in the production of fully electric models with the Jaguar I-Pace, among others.