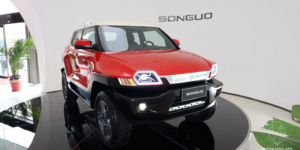 The new brand offers everything from two-wheeled vehicles to small cars, SUVs, pickups and even a small truck. All the models shown at the fair and other models currently under development are to go into production in the next 18 months – the first of these should already be made in a year, claims the new market participant. In addition to vehicles with electric drive, NeuWai will also have classic combustion engines in its range.

The brand describes itself as innovative in terms of material selection and distribution, among other things. As far as the latter is concerned, the South Koreans are relying on pre-assembly in a 430,000 square metre production facility in Dezhou in the eastern Chinese province of Shandong. The vehicle components will then be sold globally via distributors and will only go into final assembly in each target country. Against this background, a meeting will take place tomorrow with future sales partners from 30 countries to sign corresponding contracts, the company reports.

The future of Daimler’s Smart secured with Geely