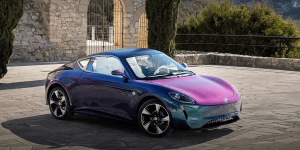 Well, that would be the GT3 study that the Chinese car brand Zedriv presented at Auto Shanghai. Despite the fact that Porsche will soon release their all-electric Taycan and the Macan, they are clearly too slow off the mark with an electric version of their 911.

Zedriv is a new EV-brand from China that is owned by state-owned China National Machinery Industry Corporation, better known as Sinomach, which, in addition to e-mobility, is primarily dedicated to the construction of agricultural machinery. The company brought 3 production cars to the Shanghai Auto Show, the most interesting of which was the Zedriv GT3 concept car, which looks like a mix of an Alpine up front and a Porsche 911 at the back.

And by that, we mean it looks exactly like the 911 from the back: Narrow lamps in Porsche style protrude far into the flared fenders, a chrome bracket connects both lamps, the manufacturer’s name is emblazoned in the centre of the rear. A powerful diffuser rounds off the rear view. The roof also brings the Porsche 911 to mind.