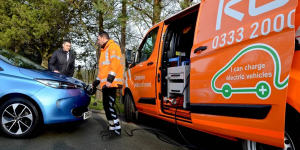 The RAC says the charging device is compatible with all Type 1 and 2 connections, accounting for the vast majority of EVs on UK roads. Initially, just six of the breakdown service’s Ford Transit Custom (diesel-powered) patrol vans will be equipped with the mobile chargers. These vehicles are being deployed in London, Birmingham and Manchester from June. RAC says the tech will be rolled out into further vehicles as the demand for electric cars increases so that hundreds of patrol vehicles could soon match the scale of demand as electric vehicle ownership grows.

Melanie Shufflebotham, the co-founder of the EV charging map, Zap-Map,  welcomes the initiative and believes “this service will give electric car drivers additional confidence as they plan longer electric journeys”.

The mobile boost for electric cars is not entirely new. In Berlin, the startup Chargery is gleaning both attention and big clients by offering the same solution with a significant difference: they get to their city customers on electric bikes with battery-pack trailers that are less likely to be caught in traffic jams. Also Freewire’s core business is mobile and networked energy storage systems, as well as low voltage fast charging systems that save operators the cost of installing a high voltage line. The solution is however semi-stationery as it is a large battery on wheels essentially that can be used on forecourts or parking lots. The Californian company is funded by both BP and Volvo reportedly.