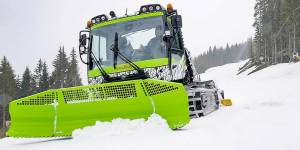 Snow groomers have the task of moving, flattening, rototilling, or compacting snow to maintain ski hills. Until now, these vehicles have been running on diesel. In 2012 Kässbohrer made the first move in the direction of emission-free ski slopes with the PistenBully 600 E+ that has a diesel-electric drive. Now the slopes can be fully electrically groomed with the PistenBully 100 E.

Groomers are mostly sent out during the night time after the close of the ski area so as not to interfere with daily and night skiing. With the fully electric snow groomer, slopes can be quietly and cleanly maintained. This will definitely make the après ski experience of drinks over overlooking the Alpine slopes considerably quieter and sweeter smelling.

The new snow groomer has a 126 kWh battery and the manufacturer says that the snow groomer can work for 2.5 to 3 hours without stopping for charging. Kässbohrer is based in Laupheim, Germany, and produces and sells slope maintenance vehicles and beach cleaning equipment worldwide under the PistenBully and BeachTech brands. Kässbohrer said that depending on customer feedback, the PistenBully 100 E is to be developed for series production.