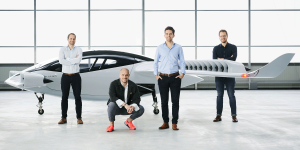 The startup Lilium from Munich wants to establish a “first-class software team” in London. Hundreds of high-end software jobs are to be created in the British capital. For the project, Lilium is getting some prominent managers on board.

Over the next five years, the new team in London is to develop the necessary software to implement the electric air taxis, as Lilium is targeting market launch by 2025. The team will be set up and managed by Carlos Morgado, previously CTO of Just Eat. Morgado previously spent seven years with AOL. The new unit will be closely linked to the existing offices in Munich and Zurich.

“Achieving our aims will require us to build one of the world’s most innovative and high-performing software engineering teams,” says Chief Commercial Officer Remo Gerber. “While we recognize that talent is global, London offers us access to a rich talent pool and an environment that’s well-suited to delivering the extraordinary.”

In addition, the company has appointed Anja Maassen van den Brink as Chief People Officer (CPO) and Luca Benassi as Chief Development Engineer. Maassen van den Brink joins Lilium from VodafoneZiggo, where as Chief Human Resources Officer and Member of the Board she led the integration of the mobile and fixed business into a company. Benassi brings more than 20 years of experience in the aerospace industry. He has worked at NASA, Boeing and most recently Airbus, where he was a Senior Expert and Head of Acoustics and Vibration.

Lilium’s goal is to position a fleet of electric aircraft in cities around the world offering pay-per-ride services by 2025. The five-seat VOTLs will be powered by 36 electric engines, have speeds of up to 300 km/h and a range of up to 300 kilometres. In Europe, the startup recently initiated the certification process for the new Lilium Jet. In addition, the USA is considered to be a key market with a large number of helicopter landing pads and airfields, which is why Lilium wants to gain a foothold there as well.

In May, the company announced that their first aircraft had completed its maiden flight.

were newly registered in the EU in the third quarter of 2021.