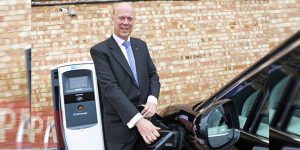 British Transport Secretary Chris Grayling has set out plans for the government to move towards ultra-low emission car fleets over the next decade. The Government Car Service is on track to meet the targets, with EVs making up nearly 23% of the fleet.

The commitment is not running deep enough, however, and the Transport Secretary has written to all government departments urging them to comply with plans for the transition to electric vehicle fleets over the next ten years. Grayling also asked all state divisions to publish a yearly progress report.

The background to this is last year’s ‘Road to Zero’ strategy, which requires all central government cars to be electric by 2030. As an interim target, at least a quarter of the fleet is to consist of electric vehicles by 2022.

According to the Transport Secretary, the Government Car Service administered by the Department for Transport (DfT) is well on the way to achieving its goals: almost 23 per cent of its fleet is now electric vehicles.

The Road to Zero strategy published last July also affects the public. The paper affirmed to ban all sales of combustion engine vehicles by 2040 reportedly but averted calls that asked to move said target forward. There was a new mid-term goal, however, as the Road to Zero Strategy specified that by 2030, at least half of all newly registered cars and 40 per cent of new vans in the UK must classify as “ultra-low emission” that is a plug-in hybrid or all-electric car. An attempt to move the zero-emission ambition forward by ten years has remained unsuccessful so far.